i had drawed a graph by clicking a analyze button, however when i click it, it will go to a new screen. below is my coding:

below is the condition i want, when i click the button Analyze, the image (graph) is showed under the button with the header and template:

my current condition is when i click the button analyze, it will totaly display the graph only without the header and template as print screen below: 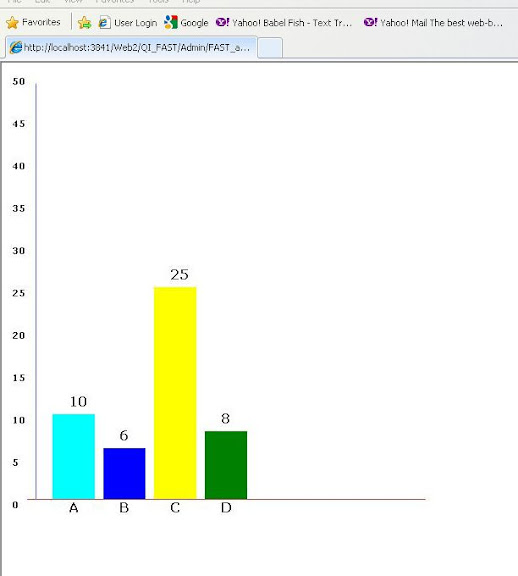 how to change the coding to let the template and heaser showed together with the bar chart?

hope can get reply from any of you. i am using vb.net

you can drow images in a separate page. and put one image control in your current page.

I am trying to display an embed an image within the body of an email. The is sent, however without the image.

Below is the code:


In the body of the email only the following is display:

Any idea how I can get the CIMG1443.JPG displaying?

is  Image is there on The path Which Your Specifiying?

U send Html Image Tag then define image in that

above link may be good Resource for you.

This table is not enough.It is Bad Design.see how you will design tabes for it.

This gif is from

I have to save Listbox  values in to my table (listbox multiply values i.e 6 vales)

Ok if you don't bother about database design It is big prob from tomm.Anyways just see how you can write sql query to insert multiple records in table

[Solved] How to Insert multiple values from a listbox or ...

DotNet Asp: Inserting multiple values from a listbox into a ...

(The following is a complete re-edit of the original post which was rambling, confusing etc...)

I have a form with a dynamically generated checklist:

The following code-behind is supposed to check those boxes that correspond to values stored in a database. It fails and I don't know why. Any ideas?

First of all, here's a tip using the Insert Code tool:  Once you've inserted a code block, don't edit it.  That's probably how you ended up with all those spurious <SPAN> tags in your C#.  (No disrespect intended - just something I had to learn the hard way.)

Secondly, .aspx pages by default post back to themselves, so you shouln't need to redirect a page back to itself.  If you use Response.Redirect to do that, you'll loose all the information saved in viewstate, which may or may not explain why you're having this problem.

HI, (this post can be ignored, see re-edit above)

I tried to edit the code down because it's a little convoluted (I'm a newbie) and I hoped just presenting the key  would make it easier to understand the problem. I'm sure those span tags didn't show in the preview!

Anyway, the page only redirects after a new record is inserted. This insures that the user is presented with a blank form to enter the next record. I see the usefulness of viewstate for many tasks, but think it less than useful for database inserts which most of the time involve moving onto the next record. I considered resetting all entry fields to blanks in the code behind, but a redirect is simpler (if not  exactly elegant).

So I am still stuck with the original problem. Is it clear what I want to be done and what the problem is?

Both scenarios/solutions I've tried take place with viewstate (not that it is used). Neither give me the result I want.

Are you running the above code in the CheckBoxList.DataBound handler or where?  (It won't work before that event.)

(And you're right about preview mode; it's useless.  You just have to learn the hard way, like all of us, that the code block starts and ends with the two blank lines above and below the code, and that once you click Insert, the only safe way to edit it is in HTML mode.  And even in HTML mode, you can't put HTML tags between the <PRE> and </PRE> tags.)